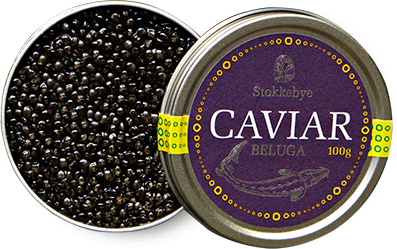 Caviar is the eggs (or roe) of female sturgeon, a “fossil” fish “化石”魚 living in coastal waters, rivers and lakes in the Northern Hemisphere.

Sturgeon
Sturgeon is the common name for the 27 species of fish belonging to the family Acipenseridae. Their evolution dates back to the Triassic some 245 to 208 million years ago. The family is grouped into four genera: Acipenser, Huso, Scaphirhynchus and Pseudoscaphirhynchus…..
Read Full Documentation

Beluga (sturgeon)
The beluga or European sturgeon is a species of anadromous fish in the sturgeon family (Acipenseridae) of order Acipenseriformes. It is found primarily in the Caspian and Black Sea basins, and occasionally in the Adriatic Sea…..
Read Full Documentation

Sturgeon can take from six to 25 years to reach sexual maturity and females of many species reproduce only once every three to four years. This means that sturgeon have fewer offspring over a lifetime than fish that reproduce at an earlier age and more frequently.

Many populations of sturgeon and paddlefish migrate through the waters of different states and countries, often resulting in a patchwork of different catch levels, season and size limits, and other management measures. Many of the world’s most imperiled sturgeon populations live in politically and economically unstable countries, further hampering effective management.

It is necessary killing the sturgeon to retrieve the caviar. Although on some sturgeon farms have developed a method for performing cesareans, allowing eggs to be removed without killing the fish. However, this practice is largely limited to the artificial reproduction and restocking efforts of Caspian hatcheries and has not been developed for the international caviar trade.

Caviar is processed, salted fish roe, eggs. There are several caviar types and many varieties of fish that contribute to this ancient gourmet treat.

Rating of Caviar
Fine caviar is rated according to…

Color is designated by…

Very light or golden roe is also designated ‘Imperial’ caviar or ‘Royal’ caviar, and was once reserved only for royalty.

The best caviar is commonly understood to be sturgeon caviar, with the largest roe and the lightest color. Expensive caviars are not priced by taste, but rarity.

Almas – the Most Expensive Caviar in the World
The white eggs are obtained from specimens more than 100 years old. As the sturgeon get older, their eggs are more elegant, smooth, aromatic and delicious with a spongier texture. The most expensive is the exclusive variety called Almas, which in Russian means “diamond”, and its price is almost as high as that of the precious gemstone.

THE MOST EXPENSIVE CAVIAR IN THE WORLD / BELUGA CAVIAR

Austria: Is this GOLD-laced caviar the world’s most expensive food?

Welcome to the world of Carelian Caviar

How It’s Made – Farmed Caviar